Geolocation does not get updated on Android Print

When the geolocation is sent

Planado sends geolocations to the server in two cases:

The main method for sending geolocation is the first one. In this case, an assignee presses the En route, Start, Pause, and Finish buttons in the Planado FSM app. Every time when an assignee presses these buttons or makes a photo in the app, Planado tries to get their geolocation. This way you can compare the job address and the assignee's real location at the moment of the job beginning, ending, and for job report fields filling. You will be able to check if the worker was in fact at the client and did not try to imitate work somewhere else.

The second method of sending geolocation is the background mode. For the Planado FSM app to send geolocations in this mode a few conditions must apply:

1. An assignee must have uncompleted jobs for the current day.

The worker does not have jobs for a day, geolocation will not be sent.

⚠️If an assignee does not have any jobs, it means they do not work this day. This is why the geolocation will not be sent.

2. Planado app starts sending geolocation at the time of the beginning of the earliest job.

If an assignee has jobs for the current day, and they have not done any actions with these jobs, the app starts sending geolocation at the time of the beginning of the earliest job.

The earliest job is set for 10:00, geolocation will start to be sent from this time

3. The Planado app starts sending geolocation after the moment an assignee changes the job status if it happens before the beginning of the earliest job.

An assignee presses En route before the beginning of the earliest job, the app starts sending geolocation from the moment of the button pressing.

4. Planado stops sending geolocation after an assignee finishes the last job for the day

When an assignee presses the Finish button in the last job for the day, the Planado stops sending geolocation.

The assignee finishes the job at 5:54 PM, the app stops sending geolocation after it.

Let's look at the possible causes of problems with geolocation sending in the background mode.

1. No jobs or all jobs are finished

If a worker does not have any jobs for the current day, the Planado app will not send geolocations. For geolocations to be sent, at least one of the assignee's job should have one of the following statuses: Not started, En route, or Started. 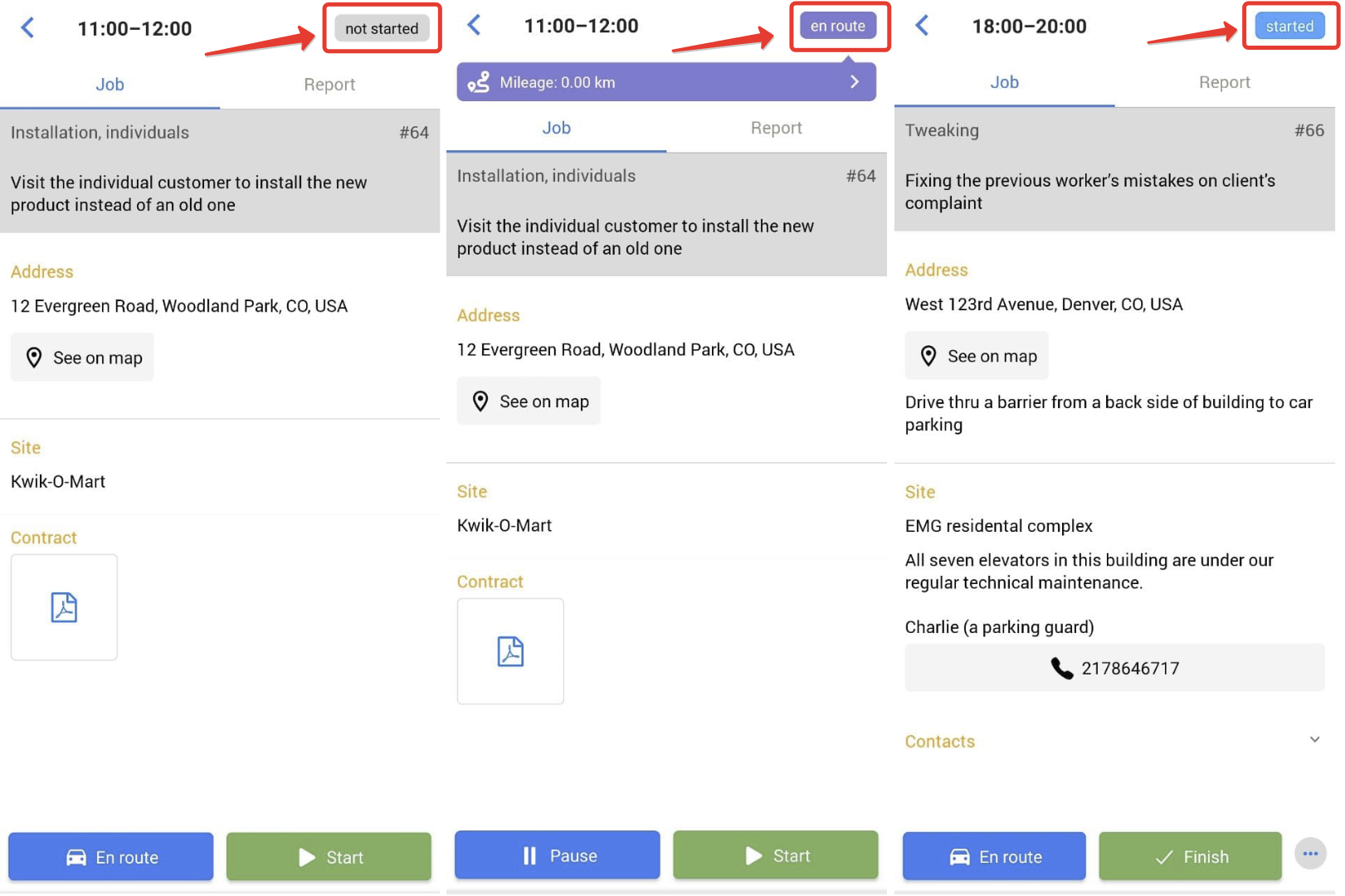 Planado sends geolocation for jobs with these statuses

2. Location is turned off

Go to Settings → Location on your Android phone. Turn on the Location.

3. No connection to the server

Planado FSM works in the offline mode and cannot send current geolocation to the server. The upper panel has a message about it.

Planado FSM is working in the offline mode

However, even in the offline mode, the app continues to collect geolocation. After an assignee's phone will be connected to the Internet, geolocation will be sent to the server and they will be visible for the dispatcher in the web application.

Sometimes Android shows that there is an internet connection but in fact, it does not work. Try checking connection in another app, for example, in the internet browser.

4. Google Location Accuracy is turned off

5. A worker has not logged in to the app

6. The app is closed or manually stopped

or was stopped manually from the Settings → Apps and notifications → Planado FSM.

Geolocation cannot be detected or can be detected incorrectly if a phone has a defective GPS module and the worker rarely has a Wi-Fi or a mobile network connection.

Check that the GPS module is working from the navigation app: Google Maps, Waze Navigator, etc.

8. Battery saver is turned on in the settings

Some phone vendors block background use of third-party apps. Go to Settings → Battery → Battery Saver. Turn off the battery saver.

Turn off the Battery Saver

9. Battery optimization is turned on for Planado FSM

The app will not be able to send geolocation if its background activity is restricted. Allow Planado FSM to work without optimization. Go to Settings → Apps & notifications → Planado FSM → Advanced → Battery optimization and select Don't optimize.

Some Android user interfaces allow locking app in the background. Open the list of the running apps and press and hold the Planado FSM. The Lock button will appear, press it.

The app will have a lock icon at the upper-right angle. The system will stop detecting it as a background app and will not block its work.

10. Wi-Fi hotspot mode is turned on

If the hotspot mode is turned on, then the geolocation can be displayed incorrectly. You need to turn off hotspot mode while you are working with the Planado app.

⚠️ Depending on the custom UI, the names of the settings and interface elements can differ from the ones presented in this instruction.

⚠️ This information was taken from dontkillmyapp.com. Please, go to this website to find solutions for phones from different vendors.

Smartphones are getting more and more powerful, but the battery capacity is lagging behind. Vendors are always trying to squeeze some battery-saving features into the firmware with each new Android release.

But some go so far that they break useful apps just to artificially claim more battery life. This even gets so absurd that with some vendors (e.g. Nokia, Xiaomi, OnePlus, Samsung, or Huawei) our smartphones are becoming dumbphones again.

Dumbphones are unable to do any useful tasks for you in the background unless you actively use your device at the time. This affects most of the apps that are not just another browser window. Most affected are alarm clocks, health trackers, automation apps, or simply anything that needs to do some job for you at a particular moment when you aren’t using your device.

With Android 6 (Marshmallow), Google has introduced Doze mode to base Android, in an attempt to unify battery saving across the various Android phones.

Unfortunately, vendors (e.g. Xiaomi, Huawei, OnePlus, or even Samsung…) did not seem to catch that ball and they all have their own battery savers, usually very poorly written, saving battery only superficially, with side effects.

Naturally, users blame developers for their apps failing to deliver. But the truth is developers do all they can. Always investigating new device-specific hacks to keep their (your!) apps working. However, in many cases, they simply fall short, as vendors have full control over processes on your device.

⚠️ In case if you need to buy phones for all your field workers, test how Planado FSM will work on the phone of your choice. Please, make sure that the battery saver manager will not kill the Planado FSM process before you buy a large number of phones.

If you need any other help regarding Planado location tracking, feel free to contact us at support@planado.app.